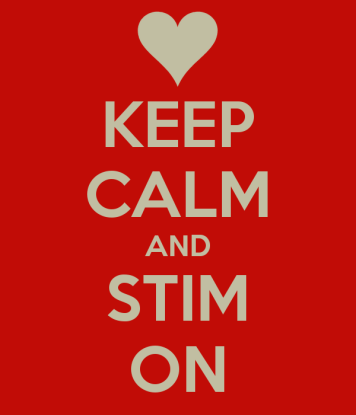 For many years, Geordie used to intermittently stop what he was doing and start pacing forwards and backwards over a distance of 4-5 metres. Along with the pacing he would do little skip-jumps, move his hands and arms up and down, clench and unclench his fists and sometimes talk to himself in a very low voice.

When he first started doing this, we would try to stop him or talk to him to distract him out of it. We soon came to realise that when he was in this zone, he was unreachable. If we physically stopped him in his tracks, he would become agitated. So we would leave him to it, knowing he would be ‘back to normal’ again in anywhere up to fifteen minutes.

This ‘pacing’ activity started, I think, when Geordie was about four years old. It wasn’t until he was in Year 1 (at the age of 6) that I found out exactly what it was — a stim.

‘Stimming,’ explained the psychologist we were seeing at the time ‘is like an itch.’

If you are itchy, you can end up being super uncomfortable until you scratch it. For people on the spectrum, the need to engage in whatever movement their stim involves has to be met, or they become uncomfortable and agitated, increasing the possibility of a meltdown.

So, Geordie’s ‘stim’ was this pacing activity. Suddenly it all made sense.

For Geordie, the need to stim can occur anywhere: at home, at the shop, in a playground, at school, on public transport, at someone else’s house …

And, the stim can occur at any time: during dinner, in the middle of watching a TV show, waiting to go out, during a lesson … morning, midday, evening.

Over the years we have noticed that Geordie stims more when he is:

♦ stressed, anxious or worried about something. This includes times when he has had a bad day at school, is having trouble completing or understanding something (or losing on the Wii) or when we are going somewhere he hasn’t been before (or has not liked previously).

He is often able to control the physical stimming itself, but not the urge to do it. In his words, ‘My body tells me I need to jump … if I don’t jump it hurts.’

At some point last year, we noticed the ‘pacing’ stim had stopped … completely. We haven’t seen him do this for well over a year now. For a while it was replaced by an alternative stim. This only happened at home and involved Geordie going outside and walking around the yard bouncing a tennis ball. He has stopped doing this now too.

At the moment we are seeing no stimming behaviours at all. The only thing I can think of, that may be a stim, is his compulsive nail-picking. He has been doing this for years, usually when he is bored.

I doubt the need to stim has ‘gone away.’ I suspect as he has become older, he has also become more aware and self-conscious, and has actively sought alternatives which are not as obvious.

Whatever the stim, the important point to realise is that it is a necessary activity for people on the spectrum.

Before we knew what Geordie’s ‘pacing’ actually was, we worried about taking him out, and about what people would say. People do stare. They make insensitive comments. Some look at you with those ‘oh you poor thing’ faces.

You may think that I would be wishing his stimming would stop. But knowing what this would do to his wellbeing, my thinking is actually quite the opposite.

My one wish is for tolerance.

Stimming is not something Geordie does to be disrespectful; nor is it a reflection on how he feels about individual people around him.

To Geordie’s teacher (many years ago) who referred to his stimming as ‘flapping around’ and told me he was doing it on purpose to disrupt the class — bugger you!

But to his teachers in the following years who accepted Geordie’s behaviours and were supportive — thank you. You have really helped to make him the boy he is today. He has come a long way … stims or no stims.

If you want to know more about stimming from the perspective of someone who does it … or just want an excellent blog written by an adult, female with Asperger’s, click on this link. Laina Eartharcher is a brilliant writer who is absolutely down-to-earth about her Asperger’s and does not beat around the bush when talking about her experiences.